I remember it was about 20 years ago that 100yen shop started to become common in Japan.
It was my sister told me about it.

Back then, it was common that 100yen shop was convenient but at the same time you couldn't be so picky about the quality of their items because it's all 100yen.
You were not supposed to expect much for the quality.

But in 20 years, there have been some new store optiong, DAISO, CAN-DO, Seria, and others.
I believe it was DAISO that initially started the 100yen store in Japan.

And also, their item coverage is getting wider and wider.
Now, you can get pretty much everything at 100yen store, food, cosmetics, all kinds of dish, cooking items, clothing items, tools, cleaning items, pet items, all kinds of consumables, baby items and so on.

There even are some items that I don't think of anywhere alse to go buy such as non-slip rubber sheet for my kids and cat use, container or box we can throw miscellaneous items in, baby plastic apron, and so on.

So, if you move to a new place, 100yen shop is probably one of the stores to go buy items for your new room.

But, there are some items that are even more expensive at 100yen store than other stores.

And I can recognize that even the quality is getting better and better.
I now think that we can expect much more than before for their item quality.

Today, I want to show you some of their must-buy items for your kids.

They have lots of kinds of kids toy, but some are still like garbage rather than toy.
We've tried some and found only a couple of items valuable although it depends on kid's preference.

And one of them my son loves and that brought us more value than 100yen is this! 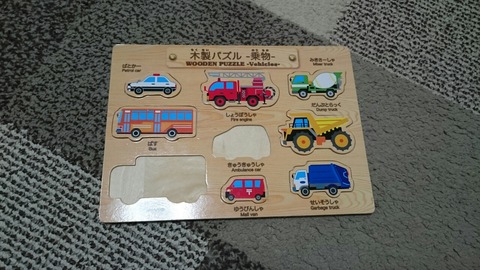 It's a puzzle of vehicle shaped pieces made with wood.

My first son loves fire truck, ambulance, truck, bus, and car.
So, I bought this at DAISO for him when he was 2 years and 2 months.
And ever since then, he plays with this once in a while though he lost 2 pieces of them.

I know another boy at about the same age playing with this same toy.

About this 100yen stores, we still need to be somewhat careful about what to buy because 100yen is cheap but still money.
You might be buying some 100yen items and throwing away some of your coins to trash at the same time like the saying "penny-wise and pound-foolish".